Winning your employees over to stick with the company long term involves an array of factors–but first among those is love.

What are the real drivers of human engagement in the workplace?

What are those things that consistently inspire people to fully commit themselves in their jobs and to willingly scale mountains for their bosses and organisations?

For the past two-plus years, I’ve been singularly focused on answering these big questions and to boiling answers down to a true bottom-line. In the service of organisations everywhere, my singular mission has been to identify the few critical leadership practices that affect people so deeply that they become uncommonly loyal, committed, and productive.

And to distill all I’ve discovered down to just one word, what workers across the globe need in order to thrive and exceptionally perform in their jobs is love.

The use of the word “love” is, of course, a huge taboo in the context of business and management. But as you read on, you’ll soon see that the love I’m referring to has nothing to do with romance, sex, or religion. The love I’m speaking of relates to the experience of positive emotions–the foundation of human motivation.

WHY WE WANT MORE

We’ve long believed that a job and a paycheck provided sufficient motivation for people to remain fully committed at work. But as levels of engagement have fallen abysmally low all over the world, the evidence is irrefutably clear that people today want and need much more in exchange for their dedicated efforts. Here’s how we know:

For nearly three decades, Gallup Research and the Conference Board have been independently monitoring employee satisfaction and engagement in more than 100 countries. The lead scientists at both organisations personally shared with me all of their dominant findings.

I also visited the two organisations consistently recognised for being the best in the world at driving employee engagement. At software analytics firm, SAS, and at Google, I met with the executive leaders who created the enlightened systems that have routinely made their firms extreme outliers in creating workplace happiness–all the while producing uncommon shareholder returns.

Drawing upon all I learned, my conclusions as to what will have the greatest impact on reversing our worldwide engagement crisis come down to just a few profoundly important revelations. As you might imagine, many of these directly challenge traditional managerial thinking:

We hear a lot about employee perks and are led to believe the more extravagant they are, the better they are in stimulating performance. With the exception of health care and on-site daycare (which make people feel valued), few other perks significantly influence engagement.

While it used to be that people derived their greatest sense of happiness from time spent with family and hobbies, how satisfied workers feel in their jobs now determines their overall happiness with life. This monumental shift means that job fulfillment has become essential to people everywhere.

The decision to be engaged is made in worker’s hearts–not minds. We now know that feelings and emotions drive human behaviour–what people care most about and commit themselves to in their lives. Consequently, how leaders and organisations make people feel in their jobs has the greatest impact on their performance by far.

For centuries, most people went to work to get a paycheck, in order to put a roof over their heads and food on their table. But as a driver of engagement, pay now ranks no higher than fifth in importance to people–in every industrialised country. What truly inspires worker engagement in the 21st century can best be described as “emotional currency.” Here’s what that means:

Having a supervisor that cares about us, our well-being, and personal growth

Without exception, bosses predominantly concerned about their own needs create the lowest levels of employee engagement. Going forward, having an authentic advocacy for the development and success of others should be prerequisite for selection into all leadership roles.

Doing work that we enjoy and have the talents to perform

Selecting people who display passion for the work they’ll be doing is perhaps the most important step toward building a highly engaged team. People can’t ever be fully engaged if their hearts aren’t in the work.

Routinely feeling valued, appreciated, and having a deep belief that the work we do matters

It’s highly destructive to people to have them strive and achieve, and to then have those contributions go unrecognized. Any company focused exclusively on driving profits–without a compelling mission–will inherently neuter engagement.

Having strong bonds with other people on the team, especially with our supervisors.

Feeling connected with and genuinely supported by others at work is a surprisingly significant driver of engagement and loyalty.

WHY IT ALL COMES DOWN TO LOVE

It was Gallup’s CEO, Jim Clifton who first suggested to me that employee engagement is ultimately driven by something deeper:

“I think you’re going to find that what people really are seeking in return for work is love,” he said.

There was no question in my mind that Clifton meant this in the most grown-up, truth-telling kind of way, and I was immediately determined to find the proof.

Fifteen years ago, University of North Carolina psychology professor, Barbara Fredrickson, began a formal study of the science of human emotions. Her conclusion today is that love, as our “supreme emotion,” affects everything human beings “feel, think, do, and become.” But it’s her meaning of love that provides the needed clarity:

Fredrickson, who won the American Psychological Association’s Templeton Prize for Positive Psychology, and who is the author of Love 2.0, insists that the human body was designed to thrive on love–to live off of it–and that it changes how the brain works. “Love transforms people into making them more positive, resilient, optimistic, persistent, healthier, and happier,” she says. Conversely, “the body’s biochemistry is very negatively affected when it’s not consistently received.”

In relating her work to how it affects our understanding of employee engagement, Fredrickson explains that no emotion is long-lasting and people need to experience positive emotions frequently for engagement to remain high: “As eating one stalk of broccoli isn’t enough to make us healthy, we need a steady diet of these momentary connections to have an impact. And given that people spend more time at work than anywhere else, their ability to thrive is really dependent on them having these moments on the job.”

When I asked Fredrickson if her research confirms that a person’s engagement at work is both established and sustained by feelings of love, she insisted it’s true. “When people are made to feel cared for, nurtured, and growing, that will serve the organisation well. Because those feelings drive commitment and loyalty just like it would in any relationship. If you feel uniquely seen, understood, valued and appreciated, then that will hook you into being committed to that team, leader and organisation. This is how positive emotions work.”

So, for any company or leader who dreams of building an exceptionally committed and productive team, I offer you my most informed advice: 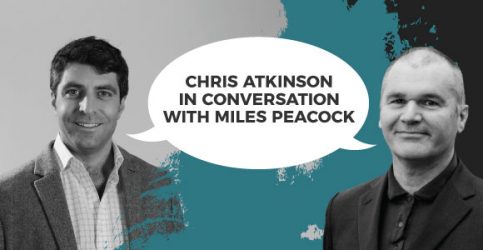 The pivot to learning online: how have trainers met the challenge?

The pivot to learning online: how have trainers met the challenge? - Since the pandemic struck, trainers and facilitators...

How to Inspire Engagement – Podcast with Chris Atkinson