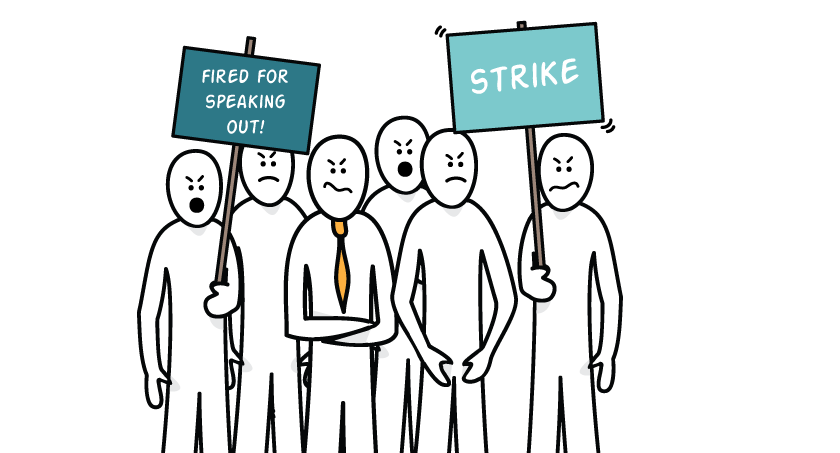 Strikes, whistle blowing, legal challenges and even tweets from employees criticising their own companies are going to rise, according to a survey of top companies.

Board members and senior executives say they are predicting that employee activism could cost their companies up to 25% of global revenue.

A rebellious workforce is predicted to become one of the top three risks to a company’s reputation, with many bosses suggesting that fears of job losses because of automation will fuel an employee backlash.

The threat of workplace activism was only beaten by the risk of cyber threats and a global economic slowdown.

Law firm Herbert Smith Freehills surveyed 375 board members and senior management in organisations employing more than 1,000 staff and with over £250m in annual sales.

It found 95% of companies expected a rise in the number of employees using social media such as Twitter to raise complaints and concerns about their company over the next five years.

Former Asda baker Duncan Carson, 51, from Stoke, wrote a tweet which went viral about losing his job after he was unwilling to agree to contract changes with the supermarket.

He wrote: “At midnight I was sacked by Asda after 13 years. Not for doing anything wrong but for refusing to sign a new contract agreeing to work whatever days, hours and Bank holidays that suits them that week. Not asked, told. Sign it or you’re fired. Are you next?”

Mr Carson, who is being supported by the GMB union, told Sky News: “I felt like this was a way for me to get my story out there.

“It felt intrinsically wrong to me that they (Asda) should be able to do this and although the union has been campaigning, I felt they were focusing more on the removal of paid breaks but the big part for me was the flexibility clause.”

He added: “I’m not at all surprised companies are having to prepare for an increased level of activism, particularly on social media.

“Social media democratises the storytelling… anyone can go online now and tell their story.”

One unidentified company in the survey said: “All it takes is one particularly vocal, particularly difficult individual to raise concerns through social media and whether or not there’s any basis to it, often you can’t defend yourself publicly.”

The poll found that 77% of companies expected to see more crowdfunded legal challenges, while 79% expected an increase in whistleblowers.

Despite this, only 47% of workplaces said they had a policy in place.

Georgina Halford-Hall, CEO of WhistleblowersUK, told Sky News: “WhistleblowersUK have seen a steady month on month increase in the number of people contacting us for assistance after experiencing retaliation from their employers.

“The majority of whistleblowing allegations include unethical or illegal behaviour – international fraud to the abuse of children or the elderly.

“Speak-up systems are only as effective as the organisations/boards response to the concerns raised. Organisations are hardwired to reject concerns and those raising them, we do not see this changing while current legislation exists.”

Another form of workforce activism is strikes, with the report stating that the two-day walkout by British Airways pilots in September, which saw the cancellation of 2,325 flights, cost the airline’s parent company, IAG, at least €137m (£117m).

The fears of employee rebellion are not limited to full-time staff, but also part-time and contract workers.

Emma Rohsler, a partner in Herbert Smith Freehills, told Sky News: “The results highlight a shift in employee behaviour… the reality is that employees have now found a powerful new way to be heard quickly.

“They are also more comfortable expressing themselves on issues which go beyond perceptions of traditional employee concerns – a factor which has historically not always been anticipated by companies, but which they must now also consider.”

She added: “There are so many examples of events unfolding and escalating rapidly – within days, or even hours – across social media. The speed of information flow makes it vital for companies to have plans in place to respond to a range of scenarios.

“Quite simply, any company not already taking this issue seriously and putting strategies in place to deal with risks is likely to struggle in the face of a crisis.”