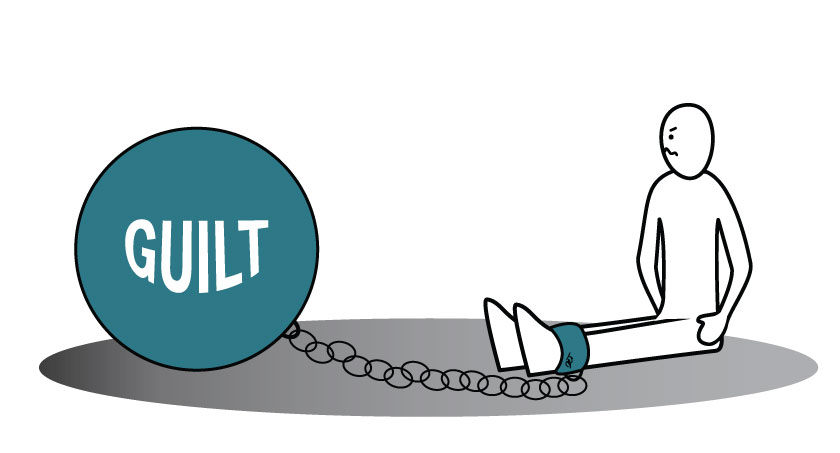 Putting guilt under the microscope for managers

How the pandemic gave us an alarm to wake us up from the excessive guilt coma!

In 2020, I was asked to deliver an interactive speech for leaders working in an organisation trying to cope with the pandemic. The senior manager was looking for resilience and adaptability from his people. The two most sought-after traits during the pandemic according to the L&D LinkedIn report. The team seemed somewhat blocked even though they had the luxury of already being digitally fluent long before the pandemic. After a long discussion with their manager, the question was ‘could they be struggling with guilt?’. We decided to take it to 100 of those managers and see what happened!

You might be thinking, how was it was possible for people to be feeling guilty for a pandemic that was outside their control. Well, guilt works in mysterious ways! Almost everyone attending this event did in fact relate to the idea of guilt.

People didn’t describe it as straight forward guilt in the beginning – it was masked. People felt that their job was incomplete or inadequate because they are not able to see their people face to face. They felt bad about not having the same impact with online events as face-to-face ones. Some felt bad for being at home for a long time. Then there is the group that felt bad for not predicting the pandemic and planning contingencies. I am sure you can imagine the other scenarios.

When asked ‘what makes you feel bad since none of this is your fault really?’, the typical answer was ‘I know…I just feel bad anyway’.

Guilt is a sneaky one! It does not ask permission from our logic. It can operate in our system with or without logic. It’s like an automatic reaction to things not going the way they habitually did.

Does this mean that when things went as they habitually did, we were guilt free? Not for everyone.

Many of my coaching clients whether overperforming or underperforming, have suffered from chronic guilt. They ranged from a CEO, a music artist, a partner in private equity firm, and a director of an NGO. They all shared the same ‘addiction’ to guilt. What changed was the reasons that justified having it.

In his book, ‘Guilt, Shame, and Anxiety’ , Peter Breggin compares guilt to a weed in a garden that can easily ruin your crop. It can lead to depression and loss of identity. When we are not on our best form, it sneaks in and ruins our best achievements.

Some of the teachers and coaches I met along my own development journey even believe that the reason guilt is ego and not development is that it represents the part of us that refuses to accept our flawed humanity. It sends us to an endless spiral of rumination and distracts us from our power to act with strengths we naturally possess. That spiral can feel like a coma that needs a gigantic alarm to wake us up from it. The pandemic was a perfect alarm for the 100 leaders I worked with to examine guilt and maybe end the ongoing spiral.

Why?
If our system activated guilt in such an illogical time, then we have very good evidence that our expectations are unexamined and that how we wired ourselves for guilt might need to be put under the microscope. The pandemic might just be the ‘glitch in the guilt matrix’ that allows managers to finally see the truth. It is our chance to level up our consciousness, resilience and leadership. At least it was for the people in this event.

Let’s examine guilt!
Now, let’s ask ourselves some questions to see if we are carrying some extra weight!

• When was the last time I felt guilty?
• How much time did I spend inside my head versus outside at that time?
• How did guilt affect my resilience?
• How fast did it move me to creativity, strength, or solution?
• When guilt is active, what mindset do I find myself in?
• How does guilt affect my motivation?
• How many times did I quit doing what I felt guilt about?
• Was it all based on logical, realistic expectations? How relevant were my expectations compared to the history of my true capabilities?
• What was it that finally stopped the guilt? Was it a deadline? A person? A self-generated thought?
• What physical symptoms do I get when I am stuck in guilt?

Letting go of our illogical guilt is letting go of behaviours manifestations such as these:

Procrastination: Because I feel guilty about not starting work on a project on time, I waste a few more days in a guilt spiral before I am saved by the panic of a deadline.

Defensiveness: Because I feel guilty about delivering critical feedback, it translates into defensiveness rather than empathy when it is time to communicate it. Or because I know that receiving feedback will send me to a guilt coma, I snap and refuse to take simple feedback.

Relationships: Because I feel so guilty for not reaching out to someone, I would avoid them as much as possible.

Empowerment: I can even pre-guilt things. In essence I can feel guilty about things that I didn’t even get the chance to try to do – leaving me feeling less empowered and enthusiastic about a new prospect.

Control: Because I feel guilty about work not being delivered by other people, I start taking over from them leaving me with a reputation as a “control freak”.

Paralysing Teams: Because I projected my guilt on my team, everyone felt paralysed by their own guilt, so I did not get collaboration anymore.

Physical Symptoms: Because I feel guilty, I suffer from stomach aches, insomnia, digestive issues, appetite changes, and more besides.

There were many other examples discussed during the event that related to negativity, performance, adapting to agile environments, self-confidence, engagement, flexibility, and job satisfaction.

The big question is ‘will we become immoral if we managed the guilt?’

Some people might be afraid that we if manage the guilt there is the risk of becoming immoral. It’s a very valid concern.

We might want to observe and differentiate between remorse and guilt. Remorse comes with a sadness that takes us to a closure on a certain behaviour that we no longer want to ever be involved in. Guilt comes with an anger charged negotiation. This anger can be directed towards ourselves or others.

In a more extreme case, Peter Breggin explains in his book ‘Guilt, Shame, and Anxiety’, that criminals who feel guilty might continue doing the same crime as they quickly project the pain of guilt onto their victims by saying ‘they deserve it’. Only when they feel remorse, they can start changing. The path to remorse is more likely through empathy than guilt.

When the 100 leaders understood this idea, they were given time to imagine what would their leadership look like without the nagging buzzing guilt in the background. Some of their answers were around: freedom, resilience, embracing strength, embracing others, taking more risks, transparency, innovation and more.

In the LinkedIn report, resilience is define by Gemma Leigh Roberts as ‘Enhancing resilience is all about creating your edge at work… It’s not just about learning to cope exceptionally well with challenges’. To do that it requires us to be in a mindset that focuses on strength. That will never be a mindset driven by guilt.

Start identifying your guilt and replace it with acceptance and action!
Paint a solid vision of yourself guilt free! Live up to it!

Want to talk more about this idea of guilt? please reach out to me here.

Minoush Mohyeldin
Minoush has dedicated her career to organisational development through people development, since 2001. Minoush works as an international Coach, Trainer and Master Trainer and has developed people across four continents. As an executive committee member and Regional Training Director of a training organisation operating in four countries, she established one of the most successful (award-winning) training teams of a global training organisation present in 80+ countries. After spending years in business management, she moved to entrepreneurship where she has co-founded a centre for child development.

Self-promotion is not a dirty word

Self-promotion is not a dirty word - The Instagram Influencers posting a beautifully lit selfie every two minutes and...

Elon Musk Contacted a Harvard Doctor. His Response Is a Master Class in Emotional Intelligence

3 Equations for a Happy Life, Even During a Pandemic