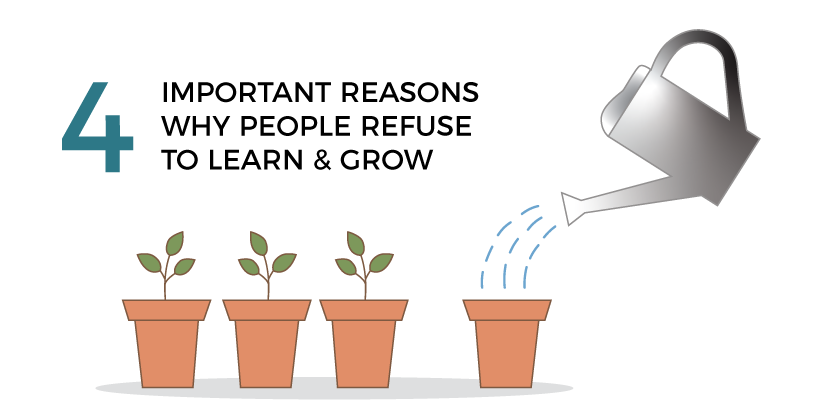 4 Important Reasons Why People Refuse to Learn And Grow

As a leadership coach, I have learned that you cannot teach someone who doesn’t want to learn or grow. Without that desire, there is no use in advising or coaching, because it just won’t work. I have never been a big believer in making people do something they don’t want to do.

What I have found is that many times people just want to keep doing the same thing over and over again without creating much change. They tend to believe that if it isn’t broken you don’t need to fix it—which means they lose out on a lot of opportunities to make something better.

The same is true for leaders, sometimes they refuse to learn and grow, and here are the four most common mindsets that feed that kind of thinking. Maybe some of them will ring true for you and sound familiar. If so, take some time to reflect on whether that’s really how you want to approach your leadership.

They know what they know

Many leaders believe they already know everything they need to know, and they don’t feel the need for any new development or growth. This type of leadership thinking is more common than you might think. The problem, of course, is that it results in a closed circuit that limits different ways of thinking and relating to others. Leadership should be about making the effort to question ourselves, being willing to be uncomfortable to maintain an open mind. The best leaders understand that they’ll never know enough.

They know what they don’t know

Some leaders actually pride themselves on the things they don’t know. They like to run things in the way that suits them, even if it’s completely counterproductive. This way of thinking sometimes comes across as arrogant. It’s often a matter of pride, combined with a bit of defensiveness about their lack of knowledge. The leaders who have the most to learn are often too proud to own up to their shortcomings. It takes courage to admit that you don’t know everything you need to know, but that’s the first step in learning.

They don’t know what is known

A leader who is not questioning is not learning. The smartest leaders are perpetual students—they have the mindset of learning something new all the time. But many times we don’t think we need to know anything new simply because we don’t exercise enough curiosity to discover the gaps in what we already know. It takes a confident leader to go out and look for those gaps so they can be filled in.

They don’t know the unknown

A leader who doesn’t know how to face the unknown will always maintain some degree of ignorance. Insight can have as much power and value as knowledge. And developing that insight means you have to be willing to approach the open questions, to acknowledge that some things can’t be known. It means opening up a different side of yourself.

Development and growth should be synonymous with who you are as a leader, not treated as a one-time event or a periodic luxury. To truly be your best, you need to adopt them as daily habits.

The best leaders insist on finding new ways to learn and grow, because they understand their growth determines who they are—and, ultimately, the success of their leadership.

Self-promotion is not a dirty word

Self-promotion is not a dirty word - The Instagram Influencers posting a beautifully lit selfie every two minutes and...

Putting guilt under the microscope for managers