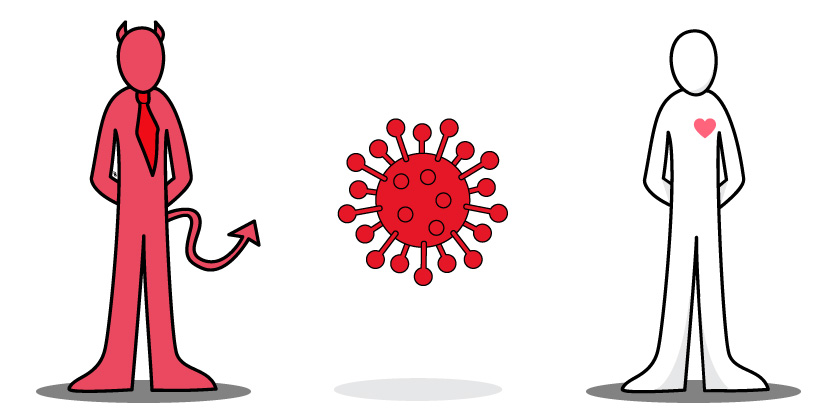 Is Coronavirus the Ultimate test in Ethical Leadership for HR?

Whether it’s furlough or free healthcare, companies’ actions during the coronavirus have come under greater scrutiny than ever. Will the organisations that followed a moral compass emerge the strongest? Jo Faragher investigates.

There’s no doubt that the coronavirus pandemic has been the maker and breaker of not just political reputations, but also corporate ones. It has seen some accused of being evil empires that rake in millions in profits yet choose to furlough their workers, while hundreds of bosses are reported to whistleblowing hotlines for claiming government financial support while asking employees to ‘volunteer’ their time.

This month’s Sunday Times Rich List certainly shone a light into how we perceive employers’ reactions to the crisis. It revealed that five of the country’s 10 richest people own companies that have furloughed workers, with some of the biggest users of the scheme (including Wetherspoons owner Tim Martin and the Weston family, who own Primark) having put tens of thousands onto the government’s job retention scheme.

Elsewhere, anonymous accounts from employees tell of shambolic returns to work: a fast-food worker in Sheffield who was forced to pack delivery meals right next to a colleague; construction workers on sites without social distancing measures; or nannies and cleaners who have been thrust back into households because their employers struggle with home schooling and housework.

Announcing the union’s A Better Recovery plan to support the UK’s economic recovery post-coronavirus, TUC leader Frances O’Grady noted how the crisis had shown “who kept Britain going” during the crisis and how “we had our priorities all wrong”. Employees that had previously been deemed low-skilled or low-paid are being clapped as heroes every week, while many high-salary, knowledge-focused staff continue from the safety of home offices.

But have UK employers really been so polarised between those putting employees at risk or refusing to value them, and others going above and beyond to keep them in work and sane?

Whether it’s the decision to furlough staff or consider redundancies in the longer term, or building a plan to bring employees physically back into the workplace, the coming months will present employers with a raft of not just practical, but also ethical dilemmas. And they might not always get it right.

In a recent article for Personnel Today, HR consultancy owner Josh Sunsoa argued that furloughing staff was “morally wrong” after a number of millionaire-backed businesses such as Victoria Beckham’s fashion empire (which later reversed its decision) decided to access the government’s job retention scheme to subsidise workers’ wages. Many readers agreed with his assessment, but some questioned HR’s power to prevent senior leadership from making the decision to claim that money.

“It’s a situation where we’re all making decisions without the considered approach we would normally take,” he says. “But there has to be a root of humanitarian responsibility within us. If everything’s a deal, about the money, then there’s no humanity.”

Sunsoa praises companies such as Burberry, which chose not to place any employees on furlough but pivoted its business to make masks for key workers.

This humanity should be extended as HR begins to have conversations with employees about returning to work, he adds. “How do you get people back to work in an environment where people have been in lockdown for a long time? There will be an impact on mental health, so in these uncertain times I would like to think we’ll have consultative conversations with those impacted. We need to be reasonable, saying ‘We’d love to have you back but how do you feel?’”

Dr Amy Bradley, author of The Human Moment and faculty member of Ashridge at Hult International Business School, agrees we’ve seen “the best and worst of organisations in all of this”. She urges employers to ask themselves: “What stories will be told about your organisation after this, will it be one your proud of or one that’s counter to your values? Can you stand by that?”

One organisation she cites as displaying a strong moral compass is global packaging business Barry-Wehmiller, whose CEO Bob Chapman took lessons from the previous financial crash of 2008/9 and applied them to the company’s reaction to the pandemic.

“He talks about a duty to look after every member of staff as though they’re a member of their own family,” explains Dr Bradley. “There’s a concept called shared sacrifice – all employees are asked to take a little pain rather than a few taking it all. By doing that, the trust is there, so when times recover people give more.”

The key is that leaders also share that sacrifice – they’re not drawing dividends while the rest of the company accepts a temporary pay cut or a short period of unpaid leave.

Emma Loisel, co-founder of independent coffee roaster Volcano Coffee Works, initially furloughed two-thirds of her staff as clients (many of them in large serviced offices or sandwich chains) cancelled orders. In the weeks that followed, it was able to shift the business focus to sell some coffee directly rather than wholesale; those working in the roastery were able to come back with adequate PPE, and many furloughed workers in non front-line roles able to return to work from home.

“There’s a concept called shared sacrifice – all employees are asked to take a little pain rather than a few taking it all” – Dr Amy Bradley, Ashridge at Hult International Business School

“Being on furlough is tough for the employees as well as the business,” she says. “At one point it’s all hands on deck and then it’s go home and wait. You just don’t know when customers will be able to open again and the volumes they’ll need.” Her company recently ran a survey of workers with a number of other food brands, which found that 86% of workers would rather be working to improve their employer’s chance of survival post-pandemic.

Revenues are slowly returning and are now about 40% to 45% of what they were pre-crisis, adds Loisel. Decisions the company makes now need to be based on “open and honest dialogue” about what’s best for the individual, not just the company.

“One employee is desperate to get back as it’s not good for them to be at home, and we have furloughed someone on the packing line who needed to be at home with a young child. You need to protect the business so it can exist for the people, but put them at the core of what you do.”

The world is watching

The ethical dilemmas presented to senior leaders will evolve and change over the coming months and weeks: from immediate decisions around who to place on furlough, to more permanent and life-changing decisions about redundancies.

It’s how these decisions are made that will determine whether those employers emerge from this challenging period with tarnished reputations, says Jane Sparrow, author of The Culture Builders: Leadership Strategies for Employee Performance. “The world is looking at how you handle this,” she says. “How you make those decisions, how you implement them. If your key talent sees you treating people badly, they may stay for now but not for the long term. People will remember.”

When engineering company Rolls-Royce announced it was going to make around 9,000 redundancies, one TV interview with CEO Warren East appeared to show the executive smirking at a colleague in the background as he discussed lay-offs for almost 18% of the workforce.

Sparrow adds: “Make honest decisions, even if they’re tough, but approach them with a level of humanity. Equip leaders so that when you have to implement something like this, you do so with care – that they own it rather than act as a mouthpiece.”

A good example is a long letter from Brian Chesky, co-founder of Airbnb, as it announced it would lay off a quarter of its staff. Alongside clear details on how the decision was reached and details of how they would be supported going forward, there was genuine contrition and sadness – with some observers calling it the perfect example of how to lead in a crisis.

Dr Bradley adds: “Where leaders have to make those decisions, there’s strong evidence that if they are compassionate, honest, treat people as adults and communicate sensitively, this can help individuals have a more positive perception of the organisation after the crisis.”

But Raj Tulsiani, leader of executive search and diversity consultancy Green Park, argues that the balance between financial survival and being a caring employer can be difficult. “The importance of inclusion, wellbeing, kindness and empathy has been brought to the fore by the crisis, as have genuine concerns about viability, cash flows and the very nature of how we organise our workforce,” he explains. “A somewhat conflicting challenge for many business leaders: How many organisations can really survive with no or dramatically-reduced revenue for four months?”

Even where organisations are gradually bringing staff back from being furloughed, they will need to make careful decisions. Janine Woodcock, a leadership coach and author, recently ran some research among employees that had been furloughed, finding that – contrary to some reports of “furlough fever” where employees have been enjoying time off in the sun at taxpayers’ expense – many fear a loss of connection with their employer, not to mention longer-term consequences for their position.

“The assumption was that furloughed staff would find receiving 80% of their salary without having to work extremely appealing. Yet, in my conversations with those being or about to be furloughed, I was hearing deep concerns such as loss of connection with teams and colleagues, loss of purpose and, of course, fear of future redundancy,” she says. “Leaders were putting all their energies into pivoting their businesses, but employees were concerned. They couldn’t do any work, access their email – for many it was an extreme experience.”

Those who have spent time away from the workplace will have fears around skills degradation, their abilities in virtual communication, argues Woodcock, while managers may have felt as though they are looking after two teams – one eye on the ones at work and the other on those on furlough. “As we return to work, they need to think about ‘reboarding’ – a bit like we onboard new employees. Those not on furlough have been working harder than ever – there could be resentment from those that stayed behind, so managers will need to consider that too.”

Josh Bersin, founder of HR consultancy and academy Bersin & Associates, recently argued that leadership will have to evolve as we address all of these ethical dilemmas – that CEO will now stand for “chief empathy officer” as companies put people at the forefront of decisions. He said: “It reinforces a new model. It reminds us that above all, business is all about people. Without a feeling of truth, trust, and power, people can’t perform. With these things, people will bring us out of this crisis.”