Many years ago, I was elected president of our company’s field leadership association. Brimming with new ideas about how to make our company better, I attended a strategic planning meeting between field officers and company executives and felt my innovative contributions were dazzling. On the drive home I asked the executive vice president, who was travelling with me, for his thoughts on how it had gone. I was looking for affirmation. I got something more precious: criticism.

“Pepper, you are bright and energetic and your ideas are spot on,” he said. “It’s just that there are too many good ideas. You’re moving faster than the rest of the room. Slow down. Triage the top two or three ideas we can all contribute to and let’s make them happen. Remember that while you are in association meetings, you are their president. Don’t act like a manager. Try being more ‘presidential.’ Be curious and invite others into the solutions. Build the teams and let the teams do the work.”

I didn’t exactly embrace this feedback right away. It took months of reflection to process what I thought was criticism, but later recognised as a gift. It was a coaching session loaded with insight and integrity. I had been the recipient of applied empathy.

My EVP knew I was new in this role, overly eager, anxious to show my bona fides. He could have chided me and dismissed my enthusiasm. Instead, he reinforced the reasons I had gotten the job in the first place as he offered sound advice on how to best move forward. We are all predisposed to “brace ourselves” for feedback, to only focus on the negative. But when someone truly shows they care, they understand where we are coming from, even taking negative feedback can come off as an overwhelmingly positive experience.

I have often observed bright, talented corporate stars, some of whom have made significant contributions to their companies, burn out prematurely. They are either regulated to a non-contributing role or asked to leave. When I ask those who decided why someone so bright didn’t eventually work out, I inevitably hear things like, “They just don’t know how to play well” (i.e. not a team player) or were clunky in his dealings with others. Organisational shifts are slight at first: “It’s just easier to do a work around them” becomes the mantra, until eventually the executive stops being asked to join key project teams.

How could the executive miss what was happening? How could the team not see their workarounds were contributing to the premature exit of someone who at one time had been viewed as invaluable? Simple. Everyone was focused on their own view. So the executive was surprised by his or her early departure, and the team was unaware how they contributed to the executive’s professional demise by withholding feedback and creating workarounds.

No one wants to be the person who one day wakes up and realises they are being frozen out at work—and that their involuntary exit is already in the works. So how do you develop more awareness, more understanding of what is happening in the corporate culture around you, and how you can fit better into it? One word: empathy.

The power of empathy

Last year, a colleague and I attended The Future of Storytelling’s annual gathering in Snugg Harbor, New York. We were checking out various breakout sessions when we stumbled into one about empathy. Empathy? As a business tool? I’d never heard of such a thing. Curious, I sat in and was captivated by Michael Ventura’s talk about how his Manhattan design firm had helped GE increase a product line’s sales by employing empathy. GE applied empathy to change the patient experience, resulting in greater demand for its machines and their enhancements to the patient experience. I was intrigued. If empathy could increase sales by changing the experience, how might professional development incorporate applied empathy to increase the productivity and retention of our most valuable resource: talent?

In 1990, science journalist Daniel Goleman popularised the concept of “emotional intelligence.” Developed by psychologists John Mayer and Peter Salovey, “EQ” was shorthand for our ability to read other people’s signals and react appropriately to them. Mayer and Salovey argued that in the end, a leader’s emotional intelligence could be more essential than one’s intellect in producing the best results.

Ventura is building on this notion and I think he’s on to something. In his new book, Applied Empathy, he posits that empathy is more than just understanding, it’s how accurately your understanding reflects someone else’s reality and, just as important, what you do with that understanding. “The words business and empathy are rarely used together—in fact, for some of us they might even sound oxymoronic, but there are incredible benefits to taking on another’s perspective in the context of our professional lives,” he writes. “Developing and using another’s point of view is at the heart of applied empathy.”

EQ has been something of a buzz term among talent professionals since Mayer and Salovey first introduced it. I think empathy may be the lynchpin to advancing their concept. Millenials, who are today’s junior executives and tomorrow’s CEOs, bring with them different expectations, a different generational lens on what leadership should look like. The next generation of leadership cares about more than salary and benefits; its members view work as something that requires meaning and purpose. Those who ignore their viewpoint do so at their corporate peril. The talent wars will be won and lost on this battlefield.

So how do we engender more empathy into our own leadership? Here are four ways to apply empathy—and produce a more energised, satisfied, and forward-thinking C-Suite.

OWN YOUR BIAS. We all have a different way of seeing things. Some of us are naturally curious, always wanting to peel back the layers until we reach the heart of a matter. Others have mastered the ability to shut out all the interference, including their inner voice and become listeners. Honing the skill of “inner listening” means we all have to recognise and work to mitigate, the biases we inherently bring when we consider what others have to say.

SHIFT YOUR SEAT. Executives, managers, employees, vendors, customers and even your competitors can each share a very authentic yet different perspective about an experience. Recently a group of executives were brainstorming but were left wanting in their observations. They decided to put labels on different chairs of the various stakeholders in their outcome. Their next round of posting emanated from the point of view of the chair they were sitting in. Somehow, this silly exercise of moving seats brought valuable insight into what they were missing sitting in their leadership chairs.

TAKE A BREATH. Our bias can be similar to muscle memory. During a game of golf, when I get tired or rushed, my default is to revert back to my bad swing, the one that has dogged me since I first picked up a club. Similarly, when we dash from meeting to meeting without an intentional empathy break, it is easy to revert back to our default bias of processing from one point of view (namely, ours) while missing the valuable perspective of others. Empathy is hard work, but it pays big dividends.

BE “ICONIC.” Asking you to put one more thing on your schedule is a big ask. But there are some quick and easy ways to keep your empathy engaged as you go about your day. Consider creating a tangible empathy icon. An icon can be a special coin or a bracelet you wear. One executive I know changed his writing pen to an inexpensive child’s pen to remind him to be curious as he wrote his notes. Find what works best for you to support this behavioural shift. But find something. 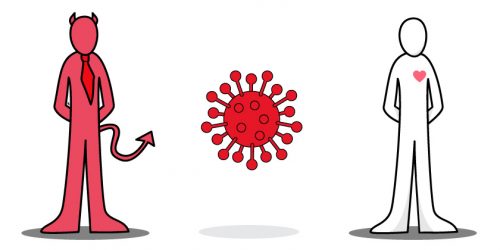 Is coronavirus the ultimate test in ethical leadership for HR? Whether it’s furlough or free healthcare, companies’ actions during the...

The Age Of Uncertainty – Agile and Leadership

Attributes of Outstanding Executives in a Crisis

How to Build Sustainable Business Leadership in a Post-COVID World

The question of the year: Are remote teams productive?

Superlearning for a future-proof workforce

Wow @MarkCCrowley > There's an enormous amount of research that connects emotional & psychological stress & #heart… https://t.co/sq03qmEjwq
Strategic Leadership @SLeadersGroup 8 hours ago
We use cookies to ensure that we give you the best experience on our website. If you continue to use this site we will assume that you are happy with it.Ok