Another day, another change. Such is a day in the life of every CEO and senior executive I encounter. Consider one client, a senior vice president of sales at a global payments company experiencing her second company restructuring in 18 months. When she received news that her team was being integrated into a new, centralised function (located five states away), just four months after the last reorganisation, her inbox was flooded by employees wondering what this would mean for them. Needless to say, she was as surprised as they were. Having seen her fair share of changes over the years, her only remark was a wry, “Well, this isn’t going to be good for our employee engagement scores.”

Moving beyond “70% of change initiatives fail”

Change can be good. It is often needed, and in many cases, long overdue. The question is not whether to change, but how, and how often. By now, there isn’t a CEO out there who hasn’t heard the oft-cited statistic that 70% of change initiatives fail. It’s no secret that leading change is difficult, and the reasons are many: People prefer the status quo, the case for change wasn’t well articulated; the communications plan was insufficient and uninspiring, and the list goes on.

But what about the fact that we are just changing too often? Is it possible that the rate of change itself is the real problem why so many company initiatives don’t achieve their desired objectives?

Students of change management might say no. After all, the rate of change in large companies was far slower 20 or 30 years ago, and just as painful then. Here’s what is also true: that pain has not gone away, likely because we have legions of employees who have witnessed poorly executed change initiatives over the years. To top it off, companies today change on a much more frequent basis, and experts predict that continued external forces (technology, competitive disruptors, demographic changes) will only increase the pressure on companies to adapt.

The case for slowing down change

Given that, it seems like a no-brainer to consider the current pace and rate of change. However, if you’re prepared to do so, get ready for strong resistance from others because slowing down is not a popular idea. Instead, here’s what you’ll hear: There are customer commitments, our investors would object, we’ve already announced the changes, our competitors would overtake us, so even if we wanted to slow down, we can’t. Plus, we’re doing fine. We’re nimble, we’re agile, we get a tremendous amount accomplished – that’s our workplace culture.

If you’re willing to consider slowing down, here’s what it can do for your organisation:

Research confirms what we already know:  Too much change is counterproductive. Employees can absorb only so much before they become over saturated, stretched too thin, and performance suffers.  Worse, the level of ongoing change and what accompanies it breeds a level of scepticism and mistrust from employees that lingers long after the changes have taken place.  For instance, a 2017 study from the American Psychological Association found 30% of all workers surveyed believe management has a hidden agenda for instituting change.   By slowing down, companies give themselves a better opportunity to gather information, ask questions, seek input, and understand what’s behind the mistrust, so they’re in a position to credibly speak to concerns and address them.

Gain commitment and buy-in by addressing pockets of resistance

What can seem like an obvious case for change for one leader can be very different for another. Consider a client leading a major technology transformation initiative designed to save his company millions of dollars.  A year into the roll out, things came to a halt, with strong objections from a group of senior business leaders inside the organisation. Turns out that in a company effort to adopt the new technology quickly, these leaders felt they hadn’t been sufficiently consulted in the decision-making process leading up to the implementation and were refusing to move forward.

By agreeing to pause the programme, meet with key business leaders, and revise the implementation plan, my client got the commitment he needed.  It’s a reminder that no matter how tempting it is to plough full speed ahead under the pressure of costs, deadlines and expectations, it is always better to slow down to fully address stakeholder concerns first. The majority of major change initiatives are driven by a sound business need, but no matter how good the idea may be, you need a serious game plan to get people to rally around the change and to make sure that the change sticks over the months and years to come.  Don’t assume that everyone will get on board just because the initiative was launched and materials were distributed.

Improve ownership and accountability for the outcome

A client wanted to understand what went wrong with a major systems implementation project at his company that was nearly 100 percent over budget, delayed by six months, and considered a major failure. One culprit? The executive steering committee, assigned by the CEO to provide oversight and leadership of the project, yet provided little of either throughout the project’s duration.

Upon reflection, many on the committee owned up to the behaviour, citing their own challenges and pressures of running their own projects during the same time frame.  They acknowledged they took their eye off the ball and assumed that if there were issues with the initiative that the project team would elevate them.  Slowing down might have provided time for the executive steering team to notice that the project was failing, to respond to project team requests for assistance, or demonstrate commitment to the cause in clear, actionable ways.  Instead, a team of senior leaders was running 100 miles per hour, too busy to hear how a critical part of the organisation needed their attention and help.

Companies have a tremendous amount at stake when they embark on change, and for leaders who can do this well, it’s a huge advantage. The key is being willing to take the courageous steps needed to ensure change can last, even if it means pushing the pause button, slowing things down, and resisting the very powerful voices that will always tell you to speed up and have a sense of urgency. In doing so, you defy the 70% odds and differentiate yourself as an exceptional leader who can drive the enormous economic value that comes from lasting and meaningful change. 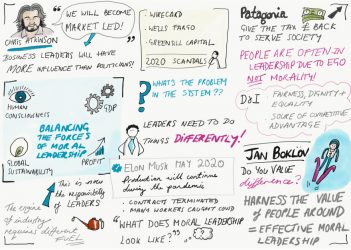 Leaders need to fundamentally change their ways of working - Interestingly at the same time as this traditional capitalist...

Restarting after the crisis

Why the Corona Crisis will Disrupt our Industry